I recently started a class here at Central about the spiritual giant, Martin Luther, so pivotal to the Protestant Reformation of some 500 years ago. So to start the first class, I had us go around the room to ask where everyone’s ancestors fell on the “church family tree”. Folks mentioned Congregationalists, Baptists, Brethren, Catholic, Mennonite, Presbyterian, Episcopalian, even Jewish heritage, along with other strands of faith, including Methodism. We thought we represented a pretty good cross-section, but we really can’t hold a candle to the 45,000 Christian denominations that have risen up since the Reformation exploded in Germany in 1517. Nowadays some might lament that the Church has morphed and split in so many directions over these 5 centuries, seeming to defy Christ’s call that his followers “would be one” (John 17:21). Yet others of us can see where such divisions allow for more redemptive ministries to be happening in Christ’s name in more places, as a result. It’s about perspective. And I’m curious to know what is your prayerful perspective, here on the cusp of our United Methodist Church likely soon to divide into two denominations over matters of human sexuality and biblical interpretation.

In my mind, a hopeful development began to take shape in the past month when a group of 16 committed United Methodists, both clergy and laity from around the globe, proposed a plan, developed over the previous four months, that would allow the church proper to renew and stabilize while supporting those who believe that it is time to separate and begin a new Methodist denomination. Made up of representatives from the traditionalist, progressive and centrist perspectives, this committee created a proposal known as the “Protocol of Reconciliation and Grace through Separation.” The protocol outlines procedures for forming new Methodist denominations and dividing the financial assets and property among the separated churches, to allow all the sides of the church to prosper and reconcile through separation.

Assuming this proposal is favorably received on the floor of General Conference later this Spring, what will likely happen is that everyone will still be United Methodist unless they decide to choose a different denomination to affiliate with. The UMC will remove all discriminatory language from our Book of Discipline (BOD), but allow freedom of conscience to clergy to do ministry in their contexts. Burke Owens, a UM pastor from Helena, Montana captures well the voices who are discussing this promising proposal, as he reports –

“We’re asking them (the global church) to do something historic, not just for the United Methodist Church, but frankly something needed in America and in the world right now, which is to watch a group of people in a large, 12 million-person institution cooperate in such a way that we help each other do the things that we desire to do and answer the callings we feel God has laid on our hearts,” said the Rev. Tom Berlin, who represented centrists in the group.

In order to create a successful protocol, the group members considered all points of view, so no theology or cultural orientation was unaccounted for. In addition, through the use of an experienced mediator while creating the protocol, the members saw the possibility of a way forward for the whole church. “One of the things the mediator offered during this process was that our job was to get to yes, and he kept reminding us of that. He also reminded us that we had the opportunity to write the narrative, and that if we didn’t write it, someone else would,” said Janet Lawrence, who represented progressives.

Key details of the protocol include growing The United Methodist Church into a more open and welcoming worship space for all people in the church while allowing traditionalist-minded congregations to form a new, separate denomination in respect of their more restricted theological view. The protocol plan also looks toward a restructuring of the remaining global United Methodist Church into regions, with greater flexibility to adapt church policies, including LGBTQ inclusion. The new traditionalist denomination would receive $25 million in United Methodist funds to create their new church and would keep their local church properties. In addition, the UMC would allocate $39 million over eight years to strengthen Asian, Black, Hispanic-Latino, Native American and Pacific Islander ministries, historically marginalized by racism.“I believe this is a fair and equitable solution that puts decades of conflict behind us and gives us a hopeful future,” said Rev. Keith Boyette, representing traditionalists.

Certainly, there are thoughtful people of faith who think such a separation will harm our movement and witness.

One such voice is Mark Tooley from his blog “Juicy Ecumenism”.

But I see across the church a new desire to move forward without acrimony. Perhaps people are just tired of arguing for 45 years. Or perhaps there is a new willingness to allow expressions of Christ’s ministry that differ from one’s own.

It is my passion and prayer and hope that every congregation find a way forward these next few years, looking for the Image of God (Imago Dei) in all those not yet included, and in one another. The sea of change may look a little rough for the UMC in coming months. Yet, we at Central have a big God-honoring vision to keep us focused and busy and compassionate toward one another. We can weather this sea of change in our denomination as we keep our eyes on the vision and work before us. I light my prayer candle often these days, for all our congregations to move forward in love, and with courageous conscience. And as Central Church moves forward as a faithful congregation open to all, I claim this mantra from John Wesley, our founder: “Proceed with much prayer, and your way will be made plain.”

I encourage you to stay informed by reading and listening between now and the proceedings General Conference, held in May in Minneapolis. Look to attend a discussion here at Central on April 15th, on the theme of General Conference and the future of the UMC. In the meantime, here are a couple more links to helpful articles:

I close with an image by the Korean artist, He Qi, in his depiction of Jesus standing calmly on the stormy sea. May we all take a clue from him. 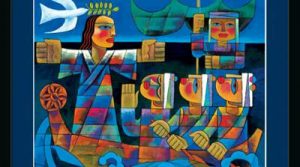 With you on the seas of change, 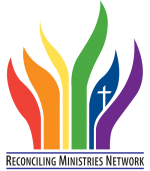