Jane & I traveled to southern Florida recently to see family, and to let our pasty skin see the light of day, for a change. We knew we would be only a few miles from the Florida community where Marjory Stoneman Douglas High School stands, and where the community would be holding a vigil of silence and protest, one month after the horrific shootings of students and teachers there. Out of respect for those grieving, we chose to arrive at the school after classes ended for the day. On a beautiful afternoon, passing manicured suburban lawns, we rounded the corner of the school entrance. So many police officers and patrol cars were there to keep the peace, and to allow mourners, from everywhere, to file by the 17 makeshift memorials to the dead. No one spoke, except in whispers. Youth brought flowers to add to the hundreds of bouquets that had accumulated for the past month. Personal notes attached to photos, candles, crucifixes, balloons. So much brokenness and reverence all along that busy road next to what could be any high school in any of our towns. I can tell you, it felt as holy a site as any cathedral I’ve ever entered.

In the days since returning to Michigan, I have been haunted by the grief we witnessed, as I should be. Many of us have heard passionate youth from around the country demand that we – leaders & citizens alike – do a better job curbing gun violence, getting the best help to persons with mental illness, and keeping persons safe in public spaces. These young people speaking from their high schools are articulate. They are clear in their message about the need for better consistent laws to keep guns out of the hands of at-risk individuals. They encourage one another. They network and support other victims across our country. Here’s a 5-minute video from Time Magazine that shows Parkland youth speaking for themselves; give a listen: https://youtu.be/7plfuM25ST0

As I write this post in the middle of Holy Week, I see these students as powerful message-bearers for life to come from death. Lately I am seeing the importance of listening to their appeals for laws to reflect greater safety, and to institute sensible gun control. It may be true that criminals will always find a way to get to guns that harm the innocent. But that doesn’t mean we should make it easy for the wrong people. A good place to start is in limiting assault rifles and the magazines that allow them to fire more rounds. Such weapons should only be allowed in the military.

So let us encourage and listen to a new generation asking for a more humane world. For United Methodists, we have a helpful resource to stir ethical thinking on hugely divisive issues such as gun control. It is called the Book of Resolutions, created for our global church, and revised every four years. Here are some good starting points for people of conscience to ponder –

United Methodists are asked to advocate at the local and national level for laws that prevent or reduce gun violence. Some of those measures include:

Yearning for a resurrected humanity, 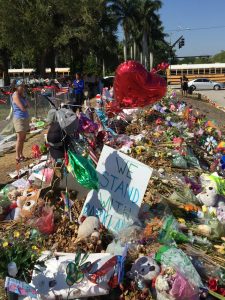